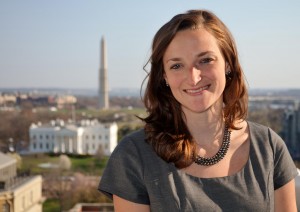 Jessica Wilde is an award-winning video producer for NASA 360 in Hampton, Va., where she tells video stories about all things NASA—from the people behind the technology to the hundreds of NASA spinoff technologies that surround you in your daily life.

Wilde has a master’s degree in multiplatform journalism from the University of Maryland, with a particular focus on video storytelling. Her work has appeared in The Washington Post, Voice of America, NBC News, The Center for Public Integrity, The American Scholar and The Daily Press.

Wilde grew up in a Navy family, moving around Europe and the east coast of the U.S., and graduated with a bachelor’s in English and creative writing from the George Washington University in 2008. She now lives aboard a 44 foot sailboat in Hampton, Va., with her husband. And yes, she makes videos about that, too.